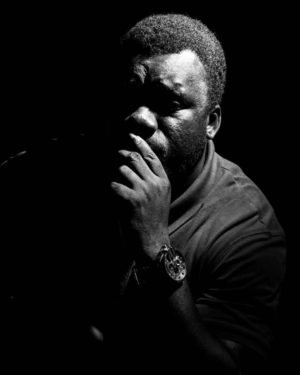 Yéanzi was born 1988 in Katiola, Ivory Coast, he lives and works in Bingerville. He graduated in painting and photography from the Lycée d’Enseignement Artistique de Cocody and the National School of Fine Arts in Abidjan where he graduated at the top of his class in 2012.

Yéanzi adept of street-art has worked as a commissioned portrait painter for about ten years. Since 2013, he pursues a personal work using the plastic he melts. He thus modifies his relationship to the portrait, painting without paint the people around him in his daily life. In this approach, he collects the stories of each person, he uses their assumed name as a title, their remarkable identity, the mask they wear in society, to reveal their personality as a watermark.

Yéanzi has received several prizes and distinctions, including the first prize for painting at the cultural competition ”Cote d’Ivoire-Israel”, in 2008. He also received the honorary diploma of the Ivorian National Order of Merit in 2012. In 2013, he is the winner of the ”Grand Prize of Guy Nairay” and the ”Bene Hoane” prize in 2013, he also participated in the ”Jeux de la Francophonie” in Nice, France.

His work was presented in 2015 at the Galerie Cécile Fakhoury Abidjan during a solo exhibition entitled “Persona”, at the exhibition Abidjan “on dit quoi?”. Young talents in 2012 at the Rotonde des Arts and in 2014 at the collective exhibition “AAA (Abidjan Arts Actuels)” at the Donwahi Foundation in Abidjan and then at the Art prize the same year at the Jack Bell Gallery in London.

Galerie Cécile Fakhoury presented her works at the Dak’art biennial off in 2016 in the exhibition “a private collection”, at the platform of the art twenty one gallery in Lagos, Nigeria, at the 1:54 Contemporary African ArtFair 2014, 2015 and 2016 in London then at the 2016 Edition in New York and at Art Dubai in 2015.

In 2017 it is presented at the 5th edition of the Cape Town Art Fair in South Africa and makes its entrance the same year at the Museum of Modern and Contemporary Art Mohammed 6 in Rabat, in the exhibition Africa in the Capital.