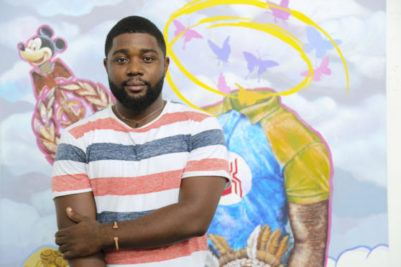 Born on 16 April 1992 in Kinshasa, DRC, where he lives and works, Hilaire Balu Kuyangiko, a contemporary Congolese artist, trained as a painter, graduated in plastic art from the Academy of Fine Arts in Kinshasa in 2014. He collaborates with the structure Kin Art Studio (KAS) in Kinshasa and is co-founder of the group Vision Total (vi.to).

In 2016, Balu decided to learn how to sculpt wood by taking inspiration from ancestral African works. This experience allowed him to develop his own view of the transformation that Congolese society is undergoing. Through the new symbols of power, which he calls “new gods”, he questions the consumerist imaginary conveyed by globalization.

In his work, he is interested in the reappropriation and contextualization of the aesthetics and philosophy of the ancestral myths Kongo / Nkisi Mangaaka. At the crossroads of iconography, he refers, among other things, to the symbolic languages of contemporary power, popular culture and art history from elsewhere. In his paintings, sculptures and drawings, the Nkisi takes a prominent place as a timeless deity now erased by the “new gods” of consumerism. However, the hybrid images, which Balu proposes, act as symbolic or metaphorical forms of the identity process situated in the unequal cultural exchange between the African continent and the rest of the world.

His work has been presented in various exhibitions such as “Kinshasa 2050” at the French Institute in Kinshasa; “Congo Star” at the Museum of Graz, Austria in 2018; the group exhibition “Megalopolis, Voices from Kinshasa” at the Museum für Völkerkunde zu Leipzig, Germany; “Kinshasa Chronicles of the City” at the MIAM Museum in Sète, France; “Young Congo” at Kin ArtStudio in Kinshasa. His works have been acquired by private collections, the Wits Art Museum (WAM) in Johannesburg and the Leipzig Museum in Germany. In 2019, he presented his work during the exhibition “Congo as fiction” at the Rietberg Museum in Zurich, Switzerland.