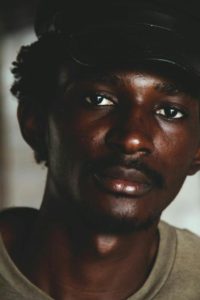 Born in Kinshasa on October 10, 1992, the artist Catheris Mondombo graduated in Sculpture from the Institute of Fine Arts in Kinshasa. He lives and works in his hometown which, according to him, is the source of his artistic approach to both the form and substance of his work.

Mondombo says he is struck by the way in which the people around him and his environment are in a perpetual search for survival. In this society of resourcefulness, he sees a similarity with astronauts who go into space to explore other possibilities for life elsewhere, once the Earth is uninhabitable. In his work, he conceptually and plastically questions this parallelism through half-abstract, half-realistic images, sometimes in weightlessness, dressed in a spacesuit. To illustrate the malaise of his society struggling to survive, he uses used tarpaulins that he recovers, usually used by Kinshasa residents to build street stalls that abound in Kinshasa.